How to Live to 100 and Keep Your Marbles

The Relationship between Alzheimer’s, Dementia and the Aging Brain

New research reveals the best way to survive from 75 to 90 years old: eat, drink, be merry, and exercise. Those who made it to 75, benefited from

Lessons Learned from the Healthy 90+

These observations come from the world’s best data on aging, the Leisure World Aging Cohort, which started with 14,000 people in 1981. The study still follows those participants who have survived to live over 90 and is now titled the 90+ Study. The principal researchers — Claudia Kawas, MD and Maria Corrada, MD — have published many studies that challenge many of the conventional assumptions about aging. The 90+ Study has better quality data because every participant agreed to an autopsy.

While you might consider an autopsy almost medieval in this age sophisticated equipment, but they reveal that the error rate between pre-mortem and post-mortem diagnoses runs around 20%. A 20% error rate is horrible. These are not minor discrepancies. In hospital studies, these discrepancies are diagnoses like undetected heart attacks or infections.

Is Alzheimer’s Really the Culprit?

The autopsies in the 90+ Study demonstrate that our conclusions about dementia — that it is mostly Alzheimer’s Disease (AD) — is wrong. About half the participants over age 90 that don’t have dementia have the brain changes of Alzheimer’s — protein scars made from tau and beta amyloid — and they may remain functional, some even driving, dancing, and dating. Among those who have dementia, slightly less than half (47%) have AD pathology. 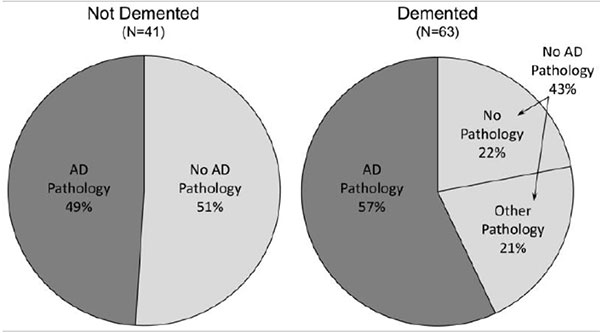 Fully half of those over the age of 90 who remain functional had the typical changes of Alzheimer’s in their brains. The “Other Pathology” in the right pie chart is microinfarct dementia, a product of vascular inflammation.

In the public arena, however, the word “Alzheimer’s” dominates charitable giving. The most recent total on the Charity Navigator website was roughly $400 million per year. There were 212 listed charities, but only six that qualified for ratings. The next-largest related category — “dementia” — had 63 charities, but none that qualified for ratings. Among the Alzheimer’s charities, the largest, the Alzheimer’s Association, has $328 million in assets, and spends 90% of its money on programs. It, too, is shifting funds to projects that underlie many forms of dementia.

In this era of ersatz Facebook pages, there is also the Alzheimer’s Research and Prevention Foundation of Arizona. In Charity Navigator, it lists income of $664,000, and the salary of its president, Dharma Singh Khalsa, as $300,000. With hundreds of millions of dollars floating around, there are many questionable “solutions” bandied about in the press. A doctor Bredesen from UCLA published a “successful” study with 10 people, using a complicated regimen of lifestyle changes, while neglecting to mention he was the scientific officer for the company publishing the software to monitor the lifestyle.

A supplement company financed a “successful” study of 40 patients using a highly absorbable, unbelievably expensive, form of turmeric. However, turmeric also absorbed efficiently when taken with a fatty meal, which is defined as 5g of fat. Or for those of you taking several grams of fish oil, take your turmeric along with it.

A Simple Prescription to Avoid Alzheimer’s

The current wisdom to prevent Alzheimer’s disease is to