Adults with diabetes are two to four times more likely to die from heart disease than adults without diabetes. At least 68 percent of people age 65 or older with diabetes die from some form of heart disease; and 16% die of stroke. Diabetes is the seventh leading cause of death in the United States. Diabetes is the leading cause of kidney failure, lower-limb amputations, and adult-onset blindness. There are 30 million diabetics in the United States. More than 20% of health care dollars (600 billion dollars) are spent on diagnosed diabetics.

There are 86 million pre-diabetics (synonyms; insulin resistance syndrome or metabolic syndrome). Ten years of the epidemic are shown below. By 2050, with current trends, 1 in 4 of all Americans will have diabetes. (CDC; Diabetes at a Glance). The US will disappear in a sea of orange. 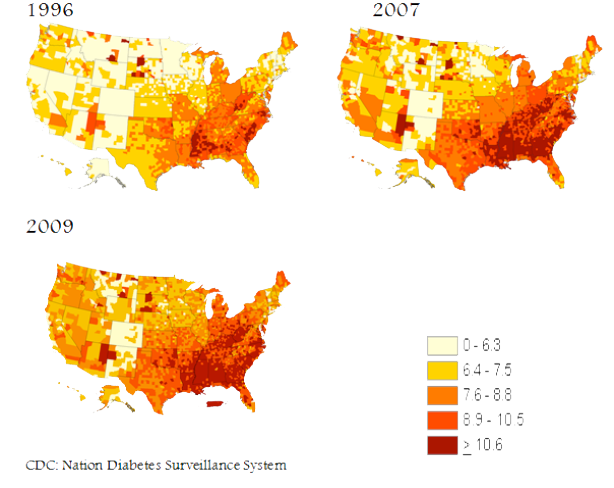 There are currently 14 million adult male Type 2 diabetics, of whom 6 million have a low testosterone level (hypogonadism). These 6 million men have more heart attacks and strokes in comparison with average diabetes, as well the same risk of osteoporosis, renal failure, amputations, and blindness. They are an expensive sub-group.

German researchers (Yassim et. Al.), by chance, had a group of 147 men with both low testosterone and Type 2 diabetes, who stopped their testosterone supplementation (for average of 1.5 years) due to cost or intercurrent illness, and then returned for supplementation.  Each patient made individual decisions and their records were gathered retrospectively. For purposes of explanation, I have grouped the data into annual averages.

After initial diagnosis and testosterone supplementation for four years, their improvement had been remarkable. On average, they lost 22 lbs. HB1AC is a 100-day average of blood sugar – healthy <5.7, prediabetes 5.7-6.4, and Type 2 diabetes  is>6.4. HB1AC declined by 11%, almost to the normal range (5.9 vs 5.7). Systolic and diastolic blood pressure declined. Cardiac Risk Ratio, a combined measure of cholesterol, declined by 30%. Their 10-year heart attack risk, calculated using the 2013 American Heart Association Cardiovascular Risk Estimator, declined by 21%. Sexual symptoms improved markedly.

In year 5, they ceased their testosterone replacement, and their symptoms and risk factors deteriorated. They gained 10 lbs., cholesterol, calculated by Cardiac Risk Ratio, rose 45%, and blood pressure rose. Their 10-year heart attack risk rose by 38%. In short, their risks for diabetic complications were worse than when they started therapy. This is not surprising — they once again had low testosterone, and they were 5 years older.

When testosterone was reinstituted in year 6, their symptoms and risk factors were reversed. 115 men who never had interruption of testosterone therapy served as controls. The interruption group and steady state group had similar test values at the end of the trial.

There are limitations to this study. It is a small number of subjects; we don’t know how they came to be at this clinic; we don’t know what other interventions — pharmaceutical, lifestyle, or dietary, took place during the eight years of the study. It is retrospective data, and there is no placebo group. We need results reproduced by other researchers. However, in this era of cherry-picking data, it is refreshing to see a comprehensive summary of the internal data. Even more important, because this is a series study, the detriment of stopping therapy, and the benefit of restarting testosterone therapy for each patient is clear, because each patient serves as his own control group.

One should recall that in the definitive study sponsored by the National Institute of Health, there was better self-esteem, sexual activity, attitude, increase in blood counts, and increased bone density. The Cardiovascular Trial showed no increased risk of heart attack or stroke. Now add to the list reversal of Type 2 diabetes in hypogonadal men, resulting in fewer cardiac by-pass procedure, strokes, amputations, kidney failure and dialysis Results would be improved with diet and exercise counseling. Below is a graphical illustration of testosterone benefit.

If our politicians want to talk about a Health Care Plan, how about one that makes people healthier. That is what testosterone did in this group of diabetics. It would take a concerted effort of our clinical leaders, major pharmaceutical firms, and major government agencies (FDA, AMA) to create an intervention program embraced by regulators and manufacturers to provide training to the medical community.

HB1AC >6.4  is the threshold for Type 2 Diabetes. You can see how the rise in testosterone is reflected the fall in in HB1AC. The same relationship (increase testosterone, decrease disease) held for weight, Cardiac Risk Ratio, cholesterol both good (HDL) and bad (LDL), blood pressure, sexual activity, and libido.