Kill Ticks and Mosquitos Before They Can Hurt You

“I love everything in the world … except for ticks.” – The Dalai Lama

American medicine has failed to prevent and treat Lyme disease in the US civilian population, and you can now get Lyme disease in all 50 states. A 10-year-old playing in his backyard has 100 times greater risk of contracting Lyme disease than a military infantryman on maneuvers 24 hours a day in tick-infested forests. This year in the United States there will be 40,000 laboratory-confirmed cases of Lyme disease and an additional 360,000 clinically diagnosed Lyme related illnesses. In the deployed military, there will be 99% less.

The history of warfare dictates increased military readiness. A soldier disabled by combat or by illness is out of action. More wars have been ended by disease than by the combatants. Malaria (transmitted by mosquitos) ended the campaigns of Alexander the Great (and also killed Alexander).  640,000 soldiers died in the U.S. Civil War; 1.4 million soldiers were disabled by malaria.

The difference is permethrin, a derivative of chrysanthemum oil. German soldiers in untreated uniforms in 2009 recorded 262 tick bites while on maneuvers. In 2010, wearing permethrin-treated uniforms, they recorded one tick bite. The ticks couldn’t bite because permethrin kills/disables them first.

Permethrin is a military insecticide – must be dangerous? Actually, it is one of the safest agricultural and medical compounds known. It’s been evaluated by the EPA, the European Union, and the National Research Council. It is used to treat head lice in three-month-olds. Permethrin is over 2,000 times more toxic to ticks than humans. Put directly on the skin, typically less than 1% of the active ingredient is absorbed into the body. Exposure risk of permethrin-treated clothing to a toddler is 27 times below the EPA’s Level of Concern. The EPA fact sheet states permethrin “does not represent an increased risk.” Organic farmers use permethrin. Most of your household cleaners are more dangerous than permethrin.

Permethrin is one of the safest agricultural and medical compounds known, evaluated by the EPA, the EU, and the National Research Council. Click To Tweet

It is, however, toxic to fish and cats, but not dogs. While not toxic, I am a great believer in not inhaling anything. Spraying should always be done and outdoors and from upwind. The military started using permethrin in 1991. 18 years later, the Centers for Disease Control finally elevated permethrin from number eight on their list of recommendations to number two.

While some ticks perch on grass or branches, the majority are on the ground in brush or leaf piles. The battle starts with your shoes, The peak incidence of Lyme disease in the United States is ages 5-15, so include your children and teenagers’ shoes as well. Line the shoes up on some old newspaper and spray them with permethrin (Sawyer brand found at Home Depot, Walmart, and Amazon) until they are damp. Do not be overly concerned about permethrin leaving stains. Below are buckskin clodhoppers. One was sprayed. One wasn’t.

If you fail to use permethrin, you or your children and are at higher risk of Lyme disease. Click To Tweet

There is a difference in the durability of permethrin on fabrics depending upon how they are treated. My recommendation is to give your outdoor shoes, socks, leggings, and pants a permethrin treatment when you buy them. Also treat outdoor lounge chairs, furniture, and carpets.

• Spraying provides protection lasting 1-3 weeks. I recommend that golfers put on their shoes and socks and spray a gentle coat of permethrin. It’s only meant to last for a round of, and most golfers aren’t going to wear permethrin-treated pants and shirts. Permethrin directly applied to the skin can cause temporary tingling and irritation so avoid the skin.

• The second method is to place articles of clothing in a zip-lock bag with dilute permethrin to soak. Let sit for several hours, then dry. I recommend putting the clothes in the dryer with an old towel and spin to remove any surface collections. This method will last up to six washings. If you are prone to rashes, don’t treat the end of the sock that goes in the shoe — moist, unventilated space is more likely to cause the rash, This military video has instructions for field (or home) use. (https://www.youtube.com/watch?v=sIRfA1_jLoU)

• The last method is to obtain commercially treated fabrics. These are good for up to 70 washings. The permethrin is bonded to the thread in the fabric, and it is the least likely to cause a rash. These are the socks I wear. One can find hiking, recreational, and working clothes. There is even a company called InsectShield where you can ship your clothing for professional treatment.

However good permethrin-treated clothing might be, there is no substitute for a tick inspection after being outdoors in grassy areas. A friend recently had to get antibiotic treatment when he discovered an engorged tick under his watchband. Your outdoor animals can bring tics in on their fur, and they’re also prone to Lyme disease. Why every garden club, outdoor organization, or home landscaper does not have knowledge of permethrin is a great public health question.

One should treat exposed skin with DEET or picaridin. These are repellents, not insecticides, and work by discouraging insects from landing. Correctly applied they are very effective. Between permethrin and DEET, you reduce the risk of all mosquito and tick-borne illnesses. That would include chikungunya, dengue fever, Rift Valley fever, yellow fever, Zika, malaria, West Nile fever, Lyme disease, Relapsing fever, Tick-borne encephalitis, tularemia, and Powassen fever.  All these diseases can have severe consequences, including fatalities.

The remaining recommendations for avoiding ticks are mostly wishful thinking. “Bright clothes” — people going outdoors do not wear bright clothing because it shows dirt too easily. “Tuck pants into socks” — that will sell with 5-15-year-olds?  they do not tuck their pants into their socks. “Check clothes for ticks” — being about the size of sesame seeds, they are tough to spot. Skin tick checks do work. Since the peak ages for Lyme disease are 5 to 15 and over 65, there may be some reluctance. 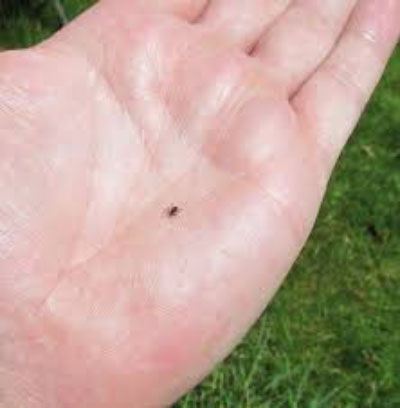 As many as 50% of people with Lyme disease do not report ever being bitten. Mr. Tick is hard to spot.

Among patients who sought treatment for Lyme disease, medical costs are about 2 billion dollars/year. Non-medical costs, such as lost work, disability, pain and suffering, and lost outdoor recreation opportunities due to fear of Lyme disease, amount to as much as 5 billion dollars (Yale Forestry School). For those who say a Lyme prevention program won’t move the needle on health care, recall former Senator Everett Dirksen, “A billion here, a billion there, and pretty soon you’re talking about real money.’

The Allocation of Time and Risk of Lyme: A Case of Ecosystem Service Income and Substitution Effects Kevin Berry

A great reference is https://tickencounter.org/