The Lone Star Tick Brings New Dangers to the Northeast

Just When You Thought It Was Safe to go Outside…

The Lone Star tick is already found in large numbers in New Jersey, Long Island, and Fairfield County in Connecticut. This aggressive human-biting tick has the potential for altering the dynamics of existing and emerging tick-borne diseases in the state and throughout the Northeast. Previously limited to the southeastern U.S., the Lone Star ticks have been detected across the northeastern U.S. including Connecticut, Maine, Massachusetts, New Hampshire, New Jersey, New York, and Rhode Island. Established populations of this tick species have now been documented in southern New Jersey, Long Island, Fairfield and New Haven Counties in Connecticut, coastal Rhode Island, and on Cape Cod and the Islands.

One Tick But A Vector for Many Diseases

In comparison with the Lyme tick, Borelli burgdorferi, the Lone Star, Amblyomma americanum, tick is larger, faster, with longer legs, and a painful bite. In comparison, the Lyme tick is slow and silent. The Lone Star tick moves fast enough that some people report they have been “chased” by them. While both tick bites can produce a similar rash, the Lone Star tick transmits its own bushel basket of diseases including tularemia, ehrlichiosis, rickettsiosis, Heartland virus disease, southern tick-associated rash illness, red meat allergy and likely the newly identified Bourbon virus disease. Many of these can be fatal. 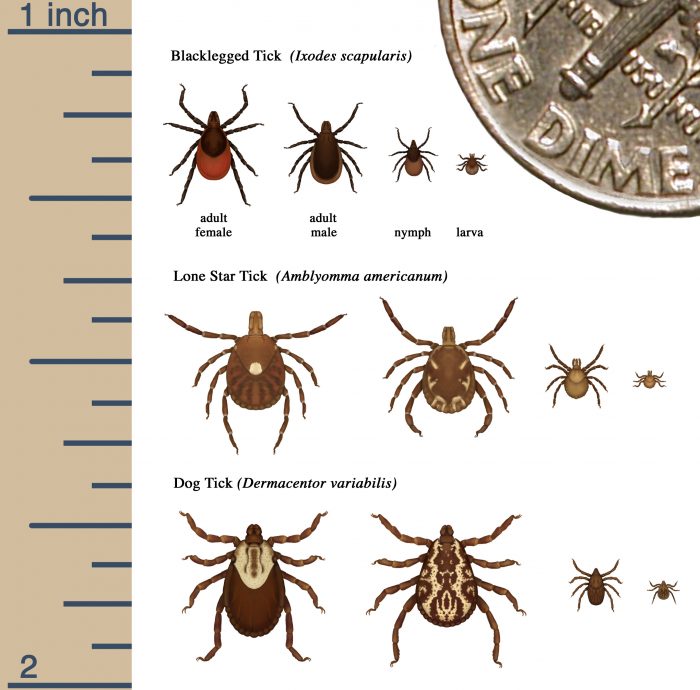 Of unique interest, one bite from a Lone Star tick can produce allergic reactions to the alpha gal protein in red meat (beef, pork, lamb, venison) including anaphylactic shock.

Twenty years ago, 0.2 percent of Connecticut’s tick population were of the lone star variety, it is now 15 times higher. Rising global temperatures, ecologic changes, reforestation, and increases in commerce and travel are important underlying factors influencing the rate and extent of range expansion for ticks and associated diseases. It is anticipated that warming temperatures associated with climate change may lead to the continued geographic range expansion and abundance of the lone star tick, increasing its importance as an emerging threat to humans, domesticated animals and wildlife.

Permethrin is Your Defense

Depending upon the annual weather conditions, adult Lone Star ticks are usually active from mid-March to late June, nymphs from mid-May to late July and larvae from July to September. Fortunately, permethrin treated clothing also disables the Lone Star tick as well as the Lyme tick, and doxycycline is the antibiotic of choice for both.

Learn how to stay safe

See my blogs about Permethrin here, here and here.