In the First Wave of Covid, we were led to believe the disease spread through surface contact or people coughing nearby. However, when Covid hit nursing homes, patients confined to their rooms succumbed to the same condition as the ambulatory patients. No surface contact or cough droplet transmission was possible.

Measures to curb airborne spread contributed to the survival of New York city’s healthcare system against frightening odds. As I write this, data from IHME (Institute for Health Metrics and Evaluation) indicates a Second Wave and much larger wave of Covid has already started. 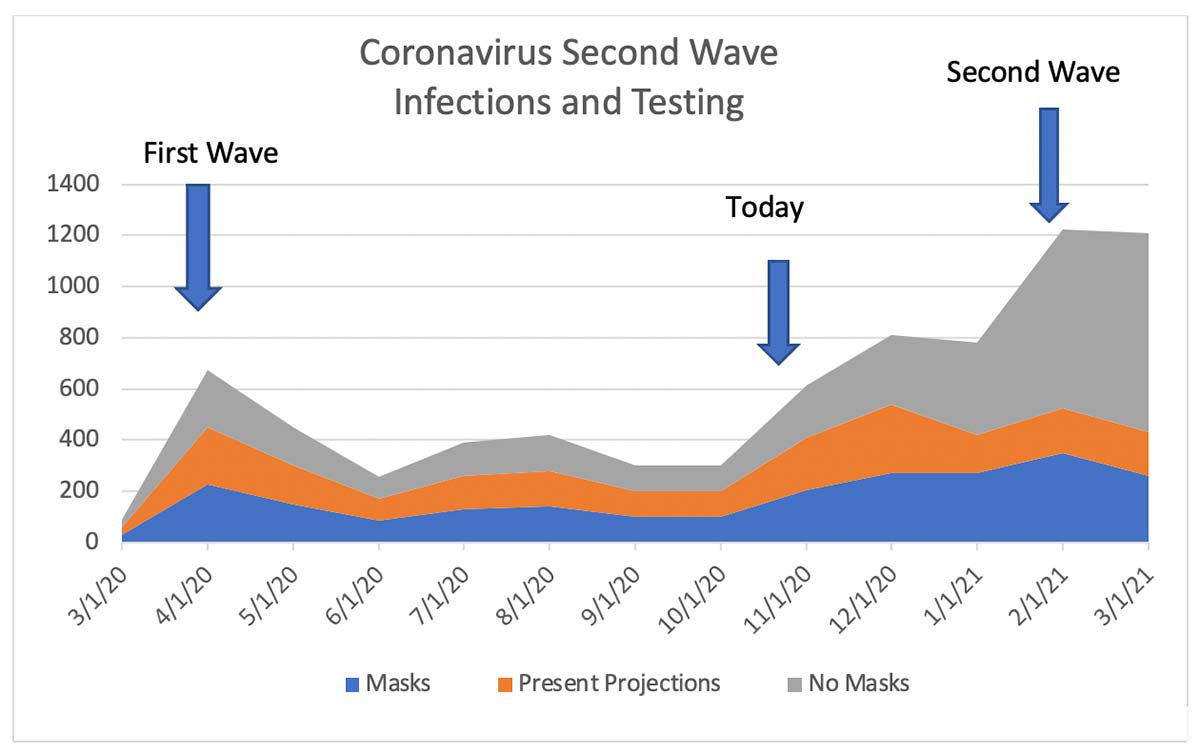 Infections, Deaths, and Hospital Resource Use all peaked in April and declined 50% by July. All Covid metrics started rebounding two weeks ago and will quadruple by February 1. Deaths are projected to double to 400,000 by March. We are in the acceleration phase of a pandemic surge. Governors are already designating overflow field hospitals. Texas has a million cases. It is here now.

In 1918, the Second Wave was ferocious. The Spanish Flu had mutated into a more lethal form, and the crowding of tens of thousands of WW1 troops into camps, ships, trains, and trenches created optimal conditions for mass spread. Coffins were stacked on the street corners of the Back Bay. Hundreds of thousands died. The Wave that followed was mild and signaled the end of the epidemic. Make no mistake; the US is headed for a nasty Second Wave winter, with spectacular infections, hospitalizations, and deaths.
You will hear this surge called Second or Third Wave. The First Wave was bifurcated, hitting the coasts first, and then the heartland later. The lack of testing contributed to the illusion of separate waves. Now, unfortunately, the entire country is a hot zone. The East and West coast states are faring better, having learned from their First Waves. Massachusetts has test positivity rate of 2.7%; South Dakota has 21%. No one knows how bad this gets

Thousands of likely Covid cases never received a Covid diagnosis during the First Wave for lack of confirmatory testing. There was a dramatic undercount. Increased testing lead to the mistaken impression of cases rising from May till October, missing the point that deaths and hospitalizations were falling.

This disease can be controlled by behavior. Examples include South Korea, Taiwan, New Zealand, China, Iceland, and more countries around the world. Covid spreads primarily by aerosols, which are fine particles floating like invisible smoke, that infected individuals exhale when breathing, singing, exercising, or speaking.

The Japanese have controlled their Covid problem with 100% mask-wearing, limiting bar and restaurants occupancy and hours, and encouraging everyone to avoid cramped spaces, crowded areas, and close conversations. Japanese children understand anti-Covid behavior better than most American adults.

#COVID19 update: The experts on the novel #coronavirus stress the need to avoid three overlapping conditions. The “Three Cs” are: closed spaces, crowded places and close-contact settings. https://t.co/YYg68WBsxo (please follow the guidelines for the public use of this poster.) pic.twitter.com/dON2CasDAE

What to Be Aware of in Your Community

Super Spreading Spaces A small choir practice room with one emitter infected 57 of 70 chorus members and three died. The other risky spaces are restaurants, nightclubs, bars, pubs, frat houses, gyms, hotels, cafes, and religious organizations. Skating rinks are a special case. Their ventilation systems are designed to entrap cold air over the ice, which unfortunately, traps Covid from the players under the temperature inversion.

Lower-income residents have higher risks because they live in more crowded neighborhoods with fewer services. They cannot afford to leave windows open in cold weather. Their grocery stores, drug stores, and bodegas are 60% more crowded, and the risk of acquiring Covid while shopping is twice as high. The risk to the people behind the counter is higher as well.

There are 20 million more low income Americans, expanding the high-risk pool. The pandemic contributed to a huge increase in those below the poverty line. They now live in more crowded conditions and the jobs they can find frequently have greater amounts of social contact. At the same time the number of emitters is rising, the size of the health care system remains the same.

Expect disparities. The real gasoline on the fire is geographically adjacent clusters, where the number of emitters in a local gathering space like a grocery store might triple overnight. This is the underlying problem causing Britain’s new lockdown. Multiple family gatherings for the holidays can be the engine for community spread.

Most infections currently come from household gatherings. Weddings, birthday parties, college parties, and even a book club caused clusters of more than 10 people.

Gatherings for Thanksgiving and Christmas represent real risks. I have not seen my daughter in London since December 2019 and likely will not see her till spring or summer of 2021. Then we will have our Thanksgiving, regardless of the date.

We need Congress to provide a social safety net so that people can protect others without sacrificing their livelihood. Click To Tweet

In the meanwhile, we must act together, do extensive testing, and be prepared to close nonessential businesses and spaces that allow crowds to congregate indoors till Spring. We need to improve ventilation, encourage mask use, self-isolate when ill, test widely, and trace contacts. We need Congress to provide a social safety net so that people can protect others without sacrificing their livelihood.

Or the short form: wear a mask, wash your hands, and socially distance.