Viagra for $7 a Dose Now Available

Viagra lost patent protection this year, and in a feeding frenzy, firms selling its generic equivalent (sildenafil citrate) are angling for a slice of Pfizer’s 2 billion dollar per year pie. There are a dizzying assortment of prices, from Pfizer’s list price of $65 per 100 mg Viagra pill, to $7 for the generic equivalent (a 920% difference!). The combination of a high list price, different insurance coverages, discounts, and copay and cash option coupons creates a confusing array of choices. Pork belly futures have less complex price movement. I’ll provide a guide to purchasing Viagra and sildenafil, but first some amusing history.

It changed the culture

Viagra was a pharmaceutical, cultural, and economic phenomenon when it debuted in 1998. Rogaine and Claritin, with Cole Porter singing “Blue Skies,” were the first drugs to use Direct to Consumer (DTC) advertising. However the Pfizer juggernaut, including inventing the diagnosis “Erectile Dysfunction,” using Senator Bob Dole as spokesman, and presenting young, healthy-appearing men with the surprising need to “talk to their doctors” (nod, nod, wink, wink) was a sensation. They highlighted the extremely rare complication of prolonged erections (only 1 per 50,000 prescriptions) as a major focus. Even now there are perfectly functioning 20-year-olds stealing their fathers’ Viagra in hopes of experiencing such an event. Former House Speaker John Boehner’s 12th-term reelection opponent aired a TV ad stating, “If you have a Boehner (Pronounced “boner”) lasting more than 23 years, call your doctor immediately.”

The discovery of Viagra’s erectile properties was an accident. In 1992 Pfizer started a trial of sildenafil citrate, the active ingredient in Viagra, to treat hypertension and heart failure. The drug was a complete bust for hypertension or heart failure. It was about as effective as a sugar pill. However, the patients, Welsh miners in the town of Merthyr Tydfil, refused to return the sildenafil citrate when the trial concluded. The local physician supervising the trial reported to Pfizer that the side effects were limited to indigestion, back pain… and erections. Erections? Hmmm?

Viagra earned more than one billion dollars in its first year and has earned over 30 billion dollars to date. Solvay pharmaceuticals, eager to have a piece of the pie, falsely claimed testosterone should be evaluated in all men with erectile dysfunction and “deficiencies” remedied with their overpriced drug Androgel. They launched their own wildly successful DTC “Low-T” DTC campaign. While Pfizer was never penalized for its overestimate of erectile function (40% of men over age 40 is too high), Solvay, laughing all the way to the bank, paid a fine of $450 million dollars to the FDA while making billions on Androgel.

There are two supplements that provide relatively consistent improvement in erectile function. Viagra works by blocking the breakdown of nitric oxide, a messenger protein that improves blood flow to the penis. Both arginine and l-citrulline increase the supply of nitric oxide, also improving erectile function, but with a less powerful effect than Viagra. However, arginine and l-citrulline are metabolized over many hours, and in some studies, are reported to prolong erections. Like all supplements, you should consult your physician.

Here are (affiliate) links to help you evaluate these supplements for yourself:

Welcome to the Wild West of Viagra Pricing

The list price for brand name Viagra is still $65 per pill. The active ingredient in Viagra is sildenafil citrate, which comes 20 mg tablets. A 100 mg Viagra pill has the same amount of sildenafil citrate as five 20 mg sildenafil tablets. Below is a table showing how much variation there in prices on just one day in May 2018. These prices can change day to day, and, indeed, even from the time a pharmacist quotes a price on the phone to when he or she actually runs the order through the computer. These numbers come from website Goodrx. There are many others — Google search “pharmacy discount coupon card” returned 18 million hits.

I have returned to the website several times and made calls to the same pharmacies. In each instance, many of the published prices are different than the actual price the pharmacist discussed with me. Caveat Emptor.

However, the coupon market has produced yet a potential new piece of Viagra humor. I am not certain that WatertreeHealthCards.com realized that by creating an alliance with the Make A Wish foundation to donate $.50 for every use of their card, they created a unique circumstance. Imagine some male of the species, rushing to a pharmacy on Friday night, holding this card in his hand, and indeed, making a wish! And supporting an excellent cause as well. 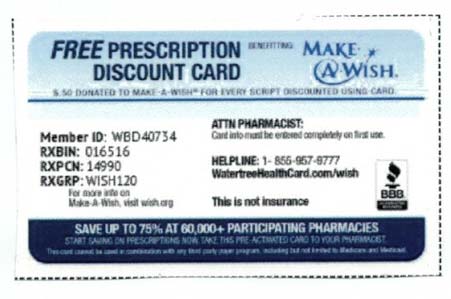 Imagine it is Friday night, and some hyperventilating male of the species rushes to his pharmacy on Friday night, handing his Make A Wish prescription discount card to his pharmacist, while, indeed, making a wish! And supporting an excellent cause as well.

All joking and economic excesses aside, Viagra brought to light the issue of male impotence, which had been a silent epidemic, and provided a solution for half of men who previously had no solution. It added sexual activity as a measure of physical and mental well-being and raised consciousness about male and female sexuality at older ages.