In April, I wrote an essay 21st Century Medicine Attacks COVID-19 at Lightspeed, describing how the full weight of modern biotechnology is be brought to bear on this pandemic. In less than 60 days, the COVID-19 spike protein had been identified as the best vaccine target and was being produced in laboratories by genetic amplification. Now the spike protein genes are being tested. Four vaccines have completed the first two (of three) human trials necessary for licensure. There are 23 other candidates in early phase trials.

Phase 1 trials involve handfuls of patients and test safety of increasing dose. Phase 2 trials, using a few hundred patients, evaluate dosage versus effect and dosage versus adverse effects. The goal is identification of the best dose/response combinations for the larger Stage 3 trial that involve tens of thousands of subjects.

Phase 3 trials are for the money, and make no mistake, there is a ton of money on the table. Based on the recent deal between the United States and Pfizer pharmaceuticals – $1.95 billion to buy 100 million doses of their vaccine – the implied price is $19.50 per dose.

However, in a Phase 3 trial, different dosages of vaccine are given to separate subject groups, all of whom live in a country or state where there is a high rate of COVID-19 activity. Right now, the United States, Brazil, and Russia would be the best testing destinations. The study examines which dose gave the greatest protection from COVID-19. In this type of “lightspeed” phase 3 trial, several dosage hypotheses will be tested at the same time, including getting a second booster dose weeks after the first one.

Should the single low dose provide as much protection as higher doses, or split doses, then vaccine distribution can be maximized. If it takes a high dose or two low doses separated in time, then the whole process will take longer.

Using the recent Pfizer deal as the example (and leaving out the pediatric population because of its low risk), Pfizer would make $6 billion vaccinating the US. If that price point holds for other countries, than the theoretical market is well over $100 billion dollars. The length of time any vaccine is protective is unknown. However, if time intervals are annual, or semiannual, just listen to the cash register ring.

One persistent problem is developing countries cannot afford $20/dose vaccine. However, without worldwide herd immunity, COVID-19 will reappear and ignite random hotspots around the world. Vaccine distribution is a complex financial and logistical problem. However, between these first four candidates discussed here, and the 23 other candidates undergoing human testing, the goal of worldwide COVID-19 suppression can be met. Does it ever go away? No one knows currently.

However, the World Health Organization, who has made intellectual bankruptcy into an artform in this pandemic, is proposing that all pharmaceutical vaccine funding be directed to their affiliate named COVAX (COVID-19 Vaccine Global Access). Then COVAX will evaluate which vaccines are most effective and direct those funds to the vaccines it concludes are the most effective. It would be the WHO’s dream to have its record of failures be rewarded with the administrative fees from 100 billion dollars, and leadership of the largest vaccination program in history.

This is a blatant overreach. The world’s major players (US, European Union, China, India) have rejected the proposal outright. Each is making deals to provide early vaccines to their constituents. The WHO’s stated objectives prior to COVID-19 were universal health care, comprehensive vaccinations, and improved mental health and well-being for 1-3 billion people, great headlines but impossible for a bloated, minor league agency with ineffectual leadership to achieve. More about WHO in my next blog.

It’s All About the Spike Protein 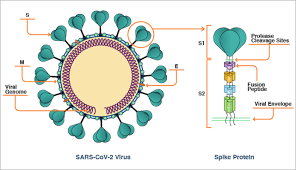 The Moderna vaccine is a messenger RNA (mRNA) vaccine made by the biotechnology company Moderna, which is working with the NIH’s National Institute of Allergy and Infectious Diseases (NIAID). The idea behind the mRNA vaccine platform is that it delivers snippets of a COVID-19 virus’s genetic code into human cells. Those cells can then translate that code into the viral attachment (spike) protein. Then the immune system mounts a response to the protein, which can attack the target virus when it invades. Moderna uses a fatty nanoparticle to carry the mRNA.

GOOD NEWS: This vaccine can be scaled up to billion dose quantities. It produces good levels of neutralizing antibodies.
BAD NEWS: its liposome carrier may deteriorate in shipping without freezing temperatures.

Moderna is the current leader. It will be the first to start Phase 3 Trial (7/27/20) and its partner is the National Institute of Allergy and Infectious Disease (i.e. Anthony Fauci, MD’s shop.

The COVID-19 spike protein mRNA is packaged into a weakened chimpanzee adenovirus, essentially the carrier of the common cold. The chimpanzee virus is also engineered so it cannot replicate in human cells.

GOOD NEWS: the primate adenovirus does not interfere with the spike protein mRNA.
BAD NEWS: Higher incidence of side-effects, but controllable with Tylenol.

This COVID-19 spike protein mRNA is packaged into a weakened human adenovirus. However, past exposure to human adenovirus, such as the common cold, diminishes the immune response to this vaccine. The incidence of previous adenovirus exposure means from 50% to 80% subjects do not generate significant antibody. This vaccine is between a rock and a hard place — it has to push up the dose to overcome the human adenovirus reactions, but that pushes up adverse effects.

GOOD NEWS: China may be able to ramp up production dramatically.
BAD NEWS: This vaccine has the worst side effects profile of all published studies. And it may work less than half the time. The vaccine has been approved for immunization of the soldiers in the PLA. Skeptics say that young soldiers might be the only group capable of enduring/surviving the side effects.

This vaccine is like Moderna’s. It uses a fatty nanoparticle rather than a fatty liposome to deliver the mRNA for the spike protein into human cells. It produced antibody levels higher than those seen in patients who recovered from COVID-19. Side effects profile was acceptable after they settled on 10 and 30 microgram doses (and discarded a 100-mcg dose).

GOOD NEWS: This vaccine can be scaled up to billion dose quantities.
BAD NEWS: its nanoparticle carrier may have temperature issues in shipping as liposomes.

The bottom line is that 2,00 patients in the four trials all developed significant antibody levels and T-cell memory. While the Sinovac vaccine produced far more severe side-effects than the others, there were no serious reactions. In the vaccine business, this is considered a good start. The Phase Three trials will start reporting late this year. The trials will involve tens of thousands of subjects, and interpretation is subject to bias, especially with billions of dollars on the table.

The wealthy nations will vaccinate their healthcare providers, first responders, essential workers, and people in nursing homes and staff, as well as those in custodial care, and the military. Each developed country, as well the Gates Foundation (and others) will provide allotments to developing countries. The WHO will try to inject itself into the process.